Whilst Coal Tit numbers continue to rise exponentially in the garden, well into double figures on view at any one time.  Typically this may be five on the ground, mopping up, six clinging to the circular feeder and another half dozen queuing in the willlow tree. Hard to keep the feeders topped up but its not as rosy for at least one of their cousins:  Blue Tits are much fewer in numbers, so far this winter.   The most I have seen in one viewing is four Blue Tits. Normally I might expect twice that number.

Early winter numbers will reflect how the species fared coming out of the previous summer / breeding season. The BTO have just published findings from its 2016 ongoing studies and surveys in the UK: They reckon that brood sizes were smaller, due to poor spring weather.  The critical period is of course when birds are hatched and near fledging: this 14 day period in early June if wet and cold, results in casualties in fledged birds through reduced feeding opportunities. 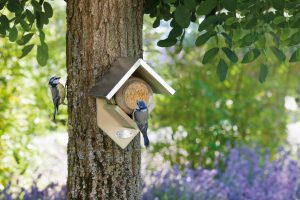 In summary: BTO report that following the worst ever breeding season on record for Blue Tits in 2016, the numbers of this species using gardens during November 2016 was the lowest since 2003.

That Coal Tits had a different out turn in 2016 is not discussed by BTO in this media release, however I suspect a difference in laying and hatching dates might have ensured a completely different outcome for the smaller Coal Tit, and they have less winter feeding competition from Blue Tits, if there are fewer out there.

Of course Blue Tits are at the common end of the garden spectrum, present in the majority of gardens.  They are well capable of bouncing back, but will need a decent breeding season in 2017 to get back the losses of 2016.

Many nest box families failed in 2016, due to wet weather at fledging time.