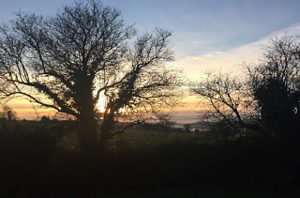 We are all a bit washed out since last November, endless rain, storms racing across the Atlantic and picking up names from the Alphabet: We are on ‘Storm Frank’ as of tonight, at this rate, we might be at ‘the Notorious Storm McGregor’ within a few months! I really enjoyed a calm and crisp dawn, just a day ago; well worth recording the event and snapping the now gaunt and bare Elder trees and the mist rising up over the Avonbeg river valley, it might be a while before we get these conditions again.

Next, after coffee, straight out into the garden to top up the feeders and then on to the nearby oakwood for some excercise . Incessant rain over the holiday period brings on cabin fever to this man and his dog. The woodland was relatively quiet, compared to the garden, but we did hear a few Treecreepers, Redwing in search of Holly berries and a party of Long Tailed Tits was a nice, chance encounter. 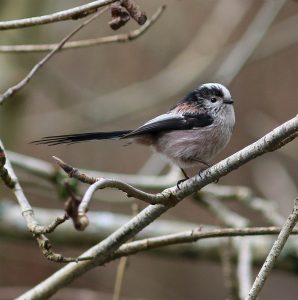 Just before exiting the Oakwood, we heard the chattering calls of Great Spotted Woodpeckers in the canopy, at a point very close to last years nest hole, I reckoned there were two or three birds and there seemed to be a bit of chasing through the upper branches. This would appear to be classic territorial behaviour, unusual I imagine in late December, but it has been so mild apart from this one cold,crisp dawn (it was raining again within four hours and the temperature then rose sharply to 11 or 12 degrees. 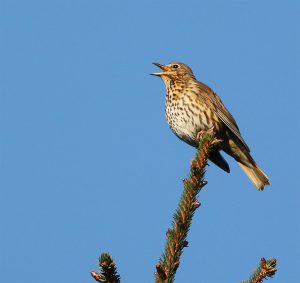 Song Thrush delivers its message from a young spruce (MOC).

No real wonder then that Song Thrushes are singing daily, for two weeks now, at least and Dunnocks, Mistle Thrushes and of course Robins join in. Territorial activity continues around the feeding station, though the Tit family and Finches seem to be content in mixed flocks and just quarrel and display over food and feeder etiquette.