We had a light dusting of snow last night, and just 2 degrees this morning, but already there are reports of spring migrants arriving in Ireland. 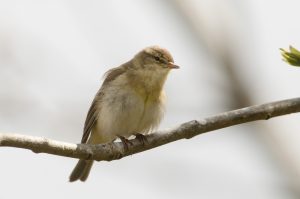 We heard a Chiff Chaff delivering its pleasing if not monotonous disyllabic song, on 16th March, perhaps a few days early for us.

They are the first of the warblers to arrive, indeed a few even winter around the coast. They are incredibly similar in appearance to the Willow Warbler. This is a classic example where a little knowledge of bird song greatly simplifies separating the two species, rather than relying on identification by appearance. The Willow Warbler, not due with us until April, will announce its presence with a contrasting and very pleasant descending cadence, as soft as a summer shower. They are the commonest warbler in Ireland, on arrival, rough and scrubby patches of woodland will echo with Willow Warbler songs producing an impromptu concert. 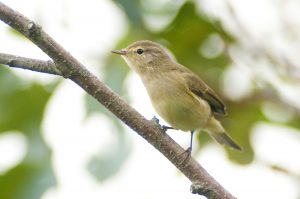 Other migrants seen in March include Sand Martins, seen even earlier in the month, but they are traditionally the earliest migrant to arrive from Africa. Its more a trickle at the moment, rather than a rush of migrants, that wont be until April when the variety and quantity begins to mount up. That said, despite the current cold conditions, the sounds of spring are with us, and the welcome is out for the promise to come!

Why not record and check sightings of migrant birds on www.irishbirding.com or for younger observers, www.springalive.net