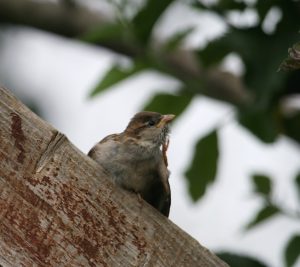 We know for quite a while now that smoking damages your health, in fact it kills.

Birds such as sparrows and crows are long known to smoke bathe over chimney pots, in an effort to reduce feather parasites.

However, Scientists in Mexico City have discovered that levels of genetic damage results in city birds caused by toxic chemicals from cigarette butts used in nest-building.

In a paper published in Frontiers in Ecology and Evolution on February 3, lead researcher Monserrat Suarez-Rodriguez reported on studies carried out on two common songbird species found in Mexico City and throughout North America: the house finch and house sparrow.

Blood samples taken during and after nest-building, brooding, and rearing of chicks revealed that the female finches showed more genetic damage than the male finches, and amount of damage increased with the number of unravelled butt filters used in the nest. Both sexes of sparrows, though, showed comparable levels of genetic damage.

Conversely, research carried out several years ago demonstrated that the usage in nest-building of contaminated cotton fibres from cigarette filters had a positive effect in repelling potentially harmful blood-sucking nest parasites such as lice, fleas, mites, and ticks.

Chemicals used in pesticides and present in the filters, such as arsenic and nicotine, were thought to be responsible, as well as other toxic substances such as “ethylphenol, heavy metals (e.g., titanium dioxide), propylene glycol, diverse insecticides, and even cyanide”.

What is not yet known yet is the ultimate breeding costs to urban birds because of the genetic damage caused by the use of anthropogenic (originating as a result of human activity) nesting materials, and whether or not that cost, if any, outweighs the parasite-repellent effect of the cigarette butts.

Suffice to say, the practice of discarding the remains or butt of the cigarette represents a straightforward act of littering and should not be tolerated.. for birds and man.