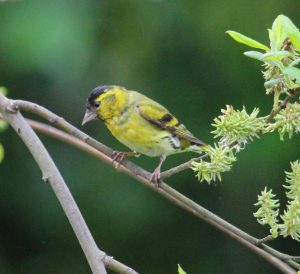 Its quite a few years ago now since a birding  friend who moved out to Ashford, County Wicklow, referred to her garden as ‘Siskin City’.  At the time this was quite a bragging point, because Siskins were rather restricted in their distribution and were not really a common garden bird, but she had them in abundance.  They are traditionally birds of coniferous forests and are keen visitors to Alder trees when the presence of cones commands a strong invitation to these emerald  acrobats. They have benfiited from the afforestation  of recent decades and their range has expanded.  Winter survival was enhanced by visits to garden bird feeders. 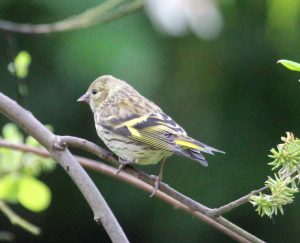 I am happy to report that they are a regular occurrence around many more gardens now: Siskins rank 18th (64% of gardens) in the top 20 garden birds.  Not that you can take them for granted: we rarely record Siskins in the months of the survey, they usually appear in late Feb but more likely March onwards.  They will stay in the Coniferous forests as long as there are cones and will stay to nest, or not depending on how adventurous or nomadic they are feeling.  A pair ringed in Thetford forest, Norfolk, was recorded two years afterwards breeding in Russia. 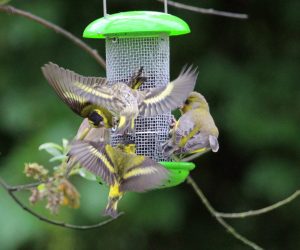 If they are around the feeders, you are unlikely to miss them: they adopt a trademark inverted approach to feeding ( peanuts or nyjer), and if there is more than one bird , expect plenty of displays and wing flicking; they even stand there ground with the much more robust Greenfinch.  The males are almost garish , with bright lemon yellow and green toning down, and black crown and bib.  The yellow tail and wing patches are really obvious as they squabble and defend their position on the feeders.  The females have a more streaked appearance and less of the day glow yellows, but a neat little package at just ten grams or so.  They are much smaller than the Greenfinch, which is from the same colour palette, but has a different bill shape and feeding method. 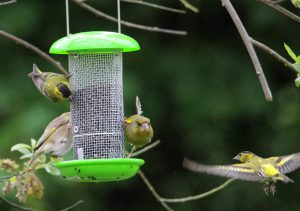 A male Siskin flies in for a Nyjer feed (c.Oran O’Sullivan)