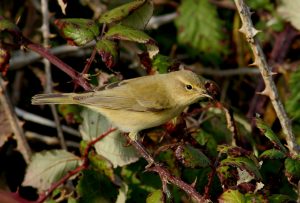 Just a few short months ago, at the end of March, I waited for the first signs of spring, avian ones that is, and was not disappointed to hear the simple disyllabic notes: ‘chiff-chaff, chiff-chaff’ coming from a nearby stand of Willow trees.  The eponymously name bird had just arrived up from Africa.  Fast forward two weeks into mid-April and Easter was ushered in to the very pleasant soft rippling cadence of notes from a close cousin, the Willow Warbler, delivered from the same stand of trees.  Chiffchaffs occupy a slightly different niche to Willow Warblers, occupying more mature tree tops.  However, spring arrivals of both species are happy to take cover where they can, especially if the Sally bushes are flowering and harbouring lots of nutritious insects. The songs are so distinct from each other, it is like a deliberate statement to separate the two species because they are so similar looking to the eye. 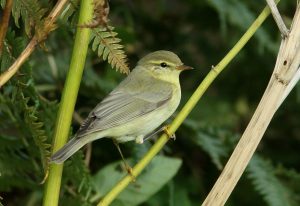 Willow Warblers are the commonest summer warbler to visit our shores.  They occupy areas of rough ground, often colonised by stands of Willow or Sallies, and are widespread throughout Ireland with an increasing trend.  Both Chiffchaff and Willow Warblers are ground nesters, though both can be difficult to see as they flit about nervously through cover, their green and beige shades blending perfectly with summer foliage. Once the singing abates, you would be excused for not noticing these active little birds until now, when in August wildlife corridors of bramble and thorn are travelled, helping them to navigate a passage that will frequently bring them into gardens before departure in September.  Some mornings, especially after rain and mist, they will flit about on the lawn, as if grounded, chasing insect prey or reach into the dry, spoked seed heads of hogweed at the back of the borders.

If you have a mind for it, this is probably a good time to tackle the identification /separation process.  Both adult and juvenile Willow Warblers are at their brightest now, with a hue of saffron breaking through the pale base of creamy underparts.  Chiffchaffs are never as bright underneath, and may appear to have a plainer facial expression: but trying to confirm nuances is tricky with such lively, restless subjects.  The contact calls are different, but depend on an experienced ear perhaps: Chiffs’ call ‘wheet’, Willows’ ‘who-eet’, (2 syllables).  Perhaps best to concentrate on getting a decent look at the legs and feet: Chiffs’ are black legged with slightly paler feet, Willows’ are reddish brown with very bright mustard feet.

Enjoy these sprites, many experienced birdwatchers are content to refer to them just as ‘Willow-Chiffs’.. 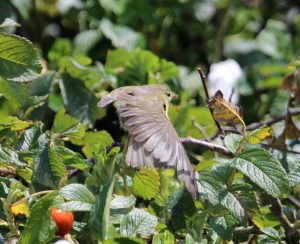