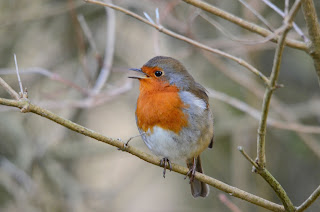 I have discovered a new alarm clock: pleasant on the ear and perfectly reliable to go off each morning, currently at about 6.00 am.
The Robin is one of the few birds that sings nearly all year round. We have just come out of the moult period when even Robins have to remain silent and inconspicuous.  This is in order to avoid detection when they might be flightless or partially so, and thus vulnerable. 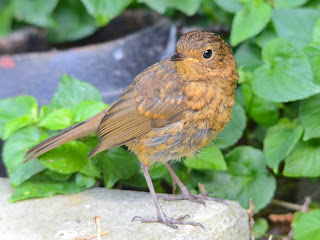 Once their plumage is sorted, Robins go about confirming their status as Ireland’s most widespread garden bird (occurring in 99% of gardens) and all the while holding a territory whose boundary is stoutly defended.  Because Robins hold winter territories, they resume song in Autumn. Both sexes sing, though audible, they usually remain in cover while singing to lessen the threat from passing predators.

The song at this time of the year is different from the early spring version: more melancholy and understated, aimed at forming and holding a feeding territory as distinct from attracting a mate.  In spring it is the male that delivers the strongest performance.

The red breast is attractive to our eyes and has sold many millions of Christmas cards, but to the Robin it is as strong as a suit of armour, to be pumped in boundary disputes and ultimately effective enough to ward off actual physical battles.  Trouble starts when the song is ignored by a neighbour who might be tempted to encroach into a prime feeding area near a bird table.  Songs are exchanged, short snappy versions of the more usual laid back version, and if this doesn’t result in a climb down by one party, posturing begins where the shape of the breast is magnified and fluffed up to intimidate.  If this fails it’s all out combat, luckily a rare outcome, that can end up in the demise of one party 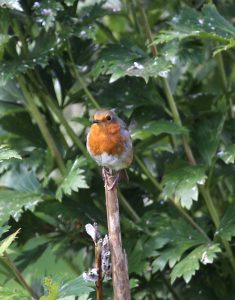 Because Robins can sing and forage in very low light conditions, they are usually last to finish at dusk and first up in the morning, and if there is an artificial light source, will sometimes sing through the night, as many a late night reveller has noted.