Goldcrests: mighty midgets on the move

Goldcrests: mighty midgets on the move 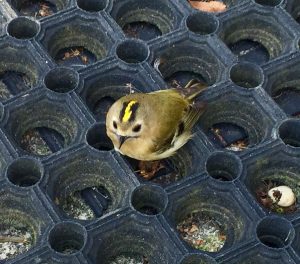 One of the most interesting visitors to the garden is the diminutive Goldcrest, all 6 or 7 grams in a rotund ball, approximately the weight of a 20-cent coin.  Not surprisingly, this is Europe’s smallest bird.  However, it may come as a surprise that this native breeding bird is joined in winter by a population of Goldcrests that migrate from as far away as Russia, to spend the winter with us in Ireland. If that were not an astounding enough fact, consider that a bird as small as a Goldcrest must spend 100% of the daylight hours feeding to retain energy to keep it warm enough to survive the long, cold nights ahead.

To survive, and Goldcrests are not in danger of extinction, they utilise their tiny size to exploit a micro insect larder that lies in the needles of conifers.  They pretty much have this micro habitat to themselves, using the fine needle like bill to extract hidden insects and spiders. They frequently hover under the last decaying, deciduous leaves, relieving them of insect life.  You won’t notice Goldcrests around the feeders, except in exceptional circumstances when they have been seen on peanut feeders.  However, you can help true insectivores like the Goldcrest by planting a range of evergreen shrubbery and even by tolerating the presence of ivy, whose late flowering balls of nectar attract a range of insects, and Goldcrests, in November and December. 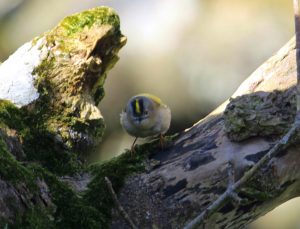 This tiny, restless sprite is not always easy to spot in cover, but you will most likely hear the Goldcrests calling: a high pitched ‘needling’ note, repeated.  They are usually encountered in mixed, roving flocks of tits and ‘creepers, a rolling maul of the light weights of the garden.  The Goldcrest has a blank, wide eyed expression, black eyes look like peppercorns, with contrasting, pale outer circles. The needle like bill has a dark line extending onto the face and the prominent feature of gold and black crown stripe is a flashy adornment that when flattened reveals a core of fire red, on the males.  The little ball like body is a blend of greens and khaki tones with a prominent pale wing bar.  This package all adds up to a ‘desert island favourite’ for me, much more valuable than a pocketful of 20 cent coins!