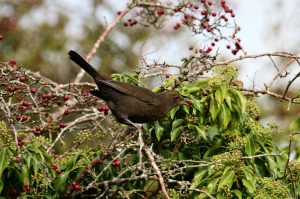 Robins and Blackbirds have a common behavioural trait: In Ireland, they are both established garden dwellers.  By contrast, in Europe these two Irish garden favourites are more likely to be found in forests.  This is a clever move: Ireland is less forested than mainland Europe, and in order to thrive, moving into gardens seems a good strategy.  They are the most widespread visitors to Irish gardens in winter, occurring in 99% of gardens surveyed in the annual Garden Bird Survey.  Blackbirds are successful adapters, and gardens have a welcoming woodland edge effect, with trees and shrubs and open lawns.    The staple diet consists of invertebrates such as earthworms, picked up on lawn patrol.. the familiar hopping action with pauses, tail cocked and wings dropped, ready to swoop on any juicy morsel that presents itself near the surface.  In autumn, especially in October, Blackbirds take to the bushes, often appearing clumsy on outer branches, attracted to the procession of ripening berries on offer.  Berries of Elder, Whitebeam and Hawthorn especially, are a popular choice in our garden. 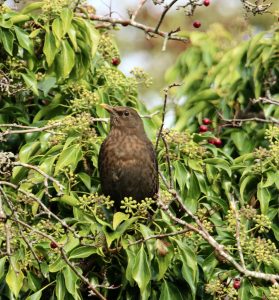 Our Blackbirds are thought to be largely sedentary, with birds from further north and east of us, (from Scotland to Scandinavia), much more likely to move west to winter in the relatively mild winter conditions of Ireland.  You can sometimes witness this inward migration on the coast, with birds making landfall often eager to hunt for food, half starved.  However, in any garden you might notice a small influx of continental birds, with some territorial squabbles leading to chases and calling at roosts.. ‘chuck..chuck’.. as local birds seek to hold their ground.  You can’t expect to hear Blackbird song for a few months yet, usually in March, though as early as January if the weather is mild.

The pacesetter for winter bird song is the Mistle Thrush, that large and boisterous cousin of the Blackbird that chases all and sundry from its precious berry stores.  Yet they still find time to deliver a haunting signature tune from on high, even on blustery winter days.  At present we have Mistle Thrushes in numbers, the autumn family parties still in existence. They are mobile enough as there are many sources of berries on the hillside, though defending a single Whitebeam tree for its berry crop seems to be a priority, their anxious calls sound like a football rattle, echoing around the garden.  Every now and again, a party of Starlings or a brave Blackbird will break the monopoly and steal a few berries before being buzzed off by the larger Mistle Thrush, it’s all to play for! 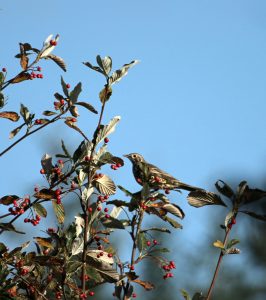