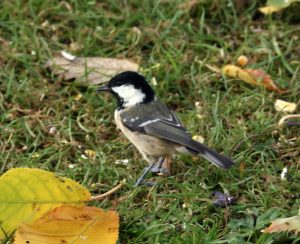 Despite relatively benign weather, so far this winter, the nights are very cool and there is plenty of feeder activity.  The Goldfinches responded immediately to the Nyjer seed ‘unveiling’, with six or eight queuing up for a turn on the feeder.  The ‘Full Irish’ mix is popular and needs refilling daily, and there are two small peanut feeders on the go.  Coal Tits are tempted out of the forest, I expect the number to build through the month of November.  If you study their behaviour around the feeders, you will notice that they move in quickly, get a hold on the end of the nut feeder or seed tube and depart just as quickly, with food in beak.  As the smallest member of the Tit family, they are competing with the larger and bossier Great and Blue Tits.  Thus, it makes sense for them to organise a ‘take away’ and they show some careful planning by depositing the cache around the garden, though they are prone to forgetting the whereabouts of individual store items, if not consumed within a few days. 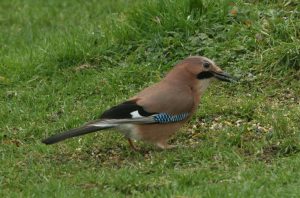 Bigger and more organised hoarders are members of the crow family, such as the Jay.  This autumn they are enjoying a bumper harvest of acorns, and I have recently observed a loose flock of 13 Jays break cover from the local oak forest and spread across open fields down into the valley.  These birds may well have been commuters, taking advantage of a great Acorn harvest and are returning with a crop full, to be deposited in their winter territory, for later use: for the rainy or freezing days ahead.  Hidden away, these fruits of the majestic Oak are likely to keep, if they are not discovered by Squirrels or competing Jays.  The larder can be on the ground, or rather just beneath it or in a crevice in a tree or any suitable nook or cranny. A figure of up to 5,000 acorns in storage is estimated for a dominant Jay.  They are accessed as they are needed, and interestingly, acorns that are not retrieved are left to seed and sprout, a long-term return on the investment.  Thus, Oak forest can be re-generated courtesy of the canny Jay, a loyal customer of the Cache and Carry. 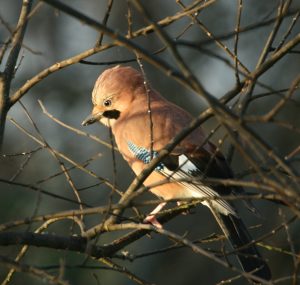