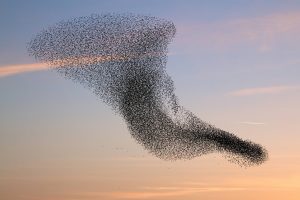 Watching a low stream of about a dozen Starlings skimming in off St. Georges Channel on the south east corner of county Wexford, I wondered at the strength of purpose, the direct flight of these birds  that have just crossed the continent , the North Sea, the UK and finally the Irish Sea.   They didn’t pause to land on the stony coast around Kilmore Quay, rather they continued inland to the rich farmed landscape that makes the journey worthwhile.  The immediate objective for these intrepid travellers is to hook up with countless other Starlings foraging in the soft green fields, enriched by grazing animals.

At dusk they will seek safety in numbers, choosing to roost in a giant shifting colony of often many thousand birds.  This roosting behaviour, often over wetlands and beside lakes and rivers, proves to be a little bit warmer on cold nights and provides more ambient conditions than a land locked roost.   Thus birds travel from many directions to join the main event, as the short hours of afternoon light wane. The pre-roost flight is known as a Murmuration, from the latin, and literally refers to ‘a murmuring’.  Relating to very large groups of Starlings, I presume it refers to the sound and chatter of the ever changing, dense flock. The phenomenon is well known, indeed numbers were probably much more impressive in the 1970s, for Starlings have taken a tumble since then.  Murmurations demonstrate some interesting mathematical models.  Each bird basically follows the movement of its nearest neighbour, leading to a wave of birds, like magnetised metal, best compared to the movement of iron filings in a simple science test.

Why Starlings choose to roost in this fashion is perhaps easy enough to explain: there is safety in numbers, when predators such as Merlins, Peregrines and Sparrowhawks are very active and can pick off isolated or lone birds.  The group roost, often in reed beds around lake fringes, or if in towns, around bridges and old dock buildings, is also the perfect way to exchange information and prepare for the following days flight plan.