Hats off to the Blackcaps

Hats off to the Blackcaps 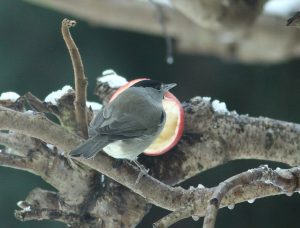 Irish gardens are increasingly important to one species of warbler, the Blackcap,

The Blackcap typically occurs in about 40% of Irish gardens in winter, according to the Garden Bird Survey, organized by BirdWatch Ireland. The survey also demonstrates some clear trends as to where wintering Blackcaps are most likely to be found. The East and south east of the country are favoured and they are much more likely to occur in suburban gardens as distinct from rural gardens, the opposite of their distribution in summer.

Survival of the fittest

All Blackcaps are migratory.  They are particularly interesting because a central European population has utilized a winter survival strategy which increases its chances of breeding success.  We know from ringing studies that Ireland’s breeding Blackcaps winter from south west Europe southwards into West Africa.   These birds depart our shores from September through October.  The garden bird survey and ringing recoveries have shown that wintering Blackcaps are in fact from central Europe and are present in Irish gardens in small numbers in November and doubling by Christmas, and remaining constant until the survey ends.  Indeed, the wintering birds often break into snatches of song in February and March.  The wintering birds in Irish gardens formerly wintered to the south of us, in Iberia. On the back of warming Irish winter temperatures, coupled with bird friendly gardens and a shorter migration commute to winter in Ireland, these Blackcaps return in good shape to their breeding grounds in central Europe earlier than the southern wintering population.  Not surprisingly they claim the best breeding territories, increasing their breeding success and increasing the genetic tendency in the local population to migrate to Ireland in winter. 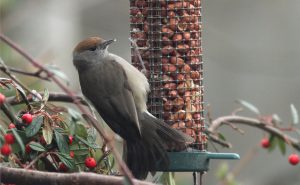 A female, with chestnut cap, takes to the peanut feeder (c. R. Coombes)

Wintering Blackcaps will take a variety of ornamental berries and are particularly fond of Ivy berries, a great late winter stand by. They are also attracted to and congregate around showy Cordyline trees, feeding on bracts of berries.  They are known to be highly territorial, chasing tits from peanut and fat feeders, and are very fond of apples, cut in half and speared on branches.  Having gained a foothold in Irish gardens, they are determined to defend their position. 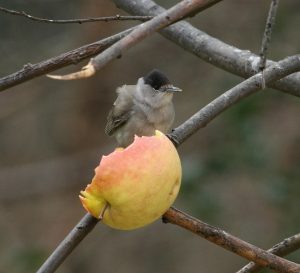