February: a shivering start to Spring

February: a shivering start to Spring

February in the Garden. Though it may not feel like it, February is the first month of Spring when the hours of daylight begin to stretch and meet us as we depart for, and return from work or school runs. This gradual lengthening triggers birds to sing and begin the process of finding a mate and setting up and defending a territory.  Expect to hear Robins, Song Thrushes and Great Tits all vocalizing as well as a few more, most noticeably the drumming of woodpeckers in the eastern half of the country, at least.

Typically, February can bring a sharp edge to weather conditions: cold and wet, with a threat of snow and ice, especially if the wind is from the north.  Birds will continue to feed in flocks and there is unlikely to be any drop off in bird table visitors as most hedgerow plants are stripped of their berries, with the exception of Ivy, which continues to provide shelter and a source of nourishing berries.

Native shrubs and trees such as Hazel and Alder are already producing seed catkins.  Pollen dispersed from catkins by wind benefits early foraging bees and other insect and the seeds are a favourite of Siskins and Redpolls.  Spring bulbs are always a delight and a useful ground cover and provider of nectar.  Look out for bright yellow Celandines, Violets and crocuses. 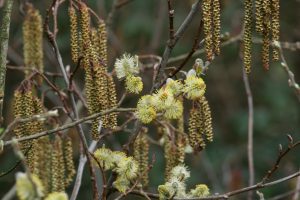 Depending on ground conditions, now is the time for some early spring maintenance of perennials: lift and divide now, as long as you can pop the ‘new’ plants into a prepared border.  Old growth, useful over winter for sheltering insects can be cut back now, to allow new growth to come through for the season ahead.  Vigourous hardwood shrubs such as Buddlia, Cotoneaster and Beberis can be pruned and shaped now, once the berry crop is gone.

There is still time to put up a nestbox or two, especially if you intend attracting a summer migrant such as a flycatcher, swallow or martin.  Check existing boxes and clean them out before the new season, though if boxes are in use as a winter roost, perhaps wait until the end of the month.  Siskins and Redpolls are most likely to visit gardens in February and March, fueling up on Nyjer seed before they depart for their next nomadic journey around northern Europe.