Looking back over my notes and Garden Bird Survey data sheet, I remind myself that a February speciality is due in the garden round about now.  The local woodland is stripped of berries and spruce cones with scaly seeds are in short supply right now.  The cones actually close up in wet weather, so seed extraction becomes more troublesome anyway and a garden visit is practical. 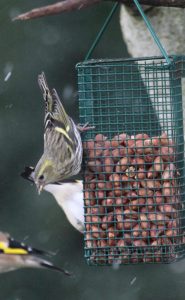 Nomadic Siskins, right on cue, arrive back with us, the second or third week of February. Normally you could describe birds popping right up, but its upside down, in the case of Siskins!

They routinely select a feeding position that might give many other birds a headache.. as agile as any tit species, they are well used to and adapted to hanging upside down to reach birch and alder seed in the forest.

It’s worth reminding ourselves that they are relatively recent garden colonists (1963 onwards), attracted by peanuts at first but showing a real fondness for the other options on offer. They nest in tops of high conifers and are traditionally a species with a northern European distribution.  Their populations have benefitted from afforestation, particularly in the lowlands, leading to a widespread increase in the breeding population.  In addition, our local birds are joined by Siskins from much further afield, migrating to our shores when the northern forests fail, in terms of seed production.  Remarkably, these wanderers can pop up in our gardens in February and March and be back breeding in the Russian Taiga forests later this spring.

Supplying a well topped up feeder of either Nyjer, Peanuts or Sunflower Hearts nearly always ensures a late winter visit, competitors that share the stage with colourful, squabbling Goldfinches.

The males are generally green, yellow and black crowned, vibrant, though similar in colour to a Greenfinch, they are much smaller birds and have a yellow stripe across the wing.  The females and young birds are more muted, with greyer, striated olive tones, but still displaying a yellow wing bar.  Look also for that distinctive feeding position and enjoy this end of winter treat.