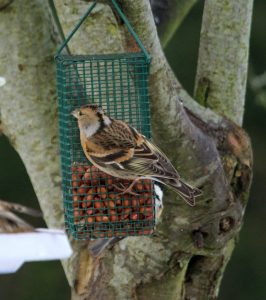 Hard weather in March. There’s a definite novelty to snow events, particularly occurring so late in the winter. the novelty tends to wear off when two feet of lying snow doubles to four in drifts and the realisation that walking 5km to the village for supplies is the only option for the weekend.

I have prepared well for the event, for the garden birds anyway.  The feeder count is nearly in double figures with a menu of Starters: Dried Mealworms, a Home-made Suet Pâté with Niger and Sunflower Hearts.  For mains: Peanuts, Niger, All Seasons mix, Suet Balls, and to finish: Red Apples on a skewer.

I reckon there are at least 50 birds milling around a relatively compact part of the garden, most are intent on feeding non-stop, though a few like Dunnocks and Robins are wasting some time and energy chasing each other across a border that is not visible to my eyes.  Blackbirds are much more willing to embrace an entente cordial, for the duration of the cold snap anyway, with at least four yellow beaked males feeding in close proximity. They are trying out the hard suet balls once I provided them on a semi-stable feeding tray. 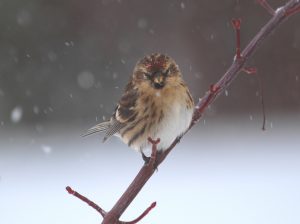 Other Thrushes are notable by their absence: no Mistle, Redwing or Fieldfare, they are either down at the east coast or departed due west for the soft, stone walled fields of Connacht.  Other absentees are Wrens, not a sign of one shuffling about the undergrowth. Also gone are the House Sparrows, I reckon they’ve found a cosy barn and a farmyard nearby and much more to their liking. When the weather improves a couple of pairs return to my eaves and chirp away in what passes for a song.  The Chaffinches are in numbers, one even has time to sing, remarkable.  The forest dwellers are in abundance here, Siskins and Redpolls, Jay and Woodpecker, and the tit family are very well represented, though no Long-tailed Tits, so far.  Others such as the Goldcrest may have remained in the micro climate of the dense conifers, though it will be some time before we know who the losers are: it’s usually the smallest birds that are hit in hard weather, ones that are more at home feeding on insect prey.  One things for sure, the breeding season will be on hold and a good return will be needed for Wrens and Goldcrests to hold their own.