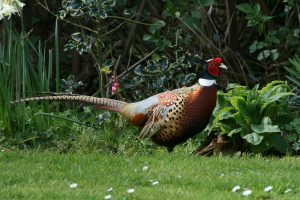 A regular wake-up call (or song) of late, is the early morning crowing of a male Pheasant or two.  The di-syllabic notes ‘not unlike clearing one’s throat, immediately followed by a short noisy wing flutter’ (Collins Bird Guide), are a staple sound in the countryside.

Yet Pheasants, despite being around Ireland for 100s of years and being impressive in stature and plumage, are not really on the radar of birdwatchers.  They are of course held in high esteem by the hunting fraternity and the annual autumn release of hand reared birds for the incoming hunting season is a key factor in their familiarity and occurrence across the land.  The introduction of Pheasants to Ireland traces back to the 16th century: the wild population is native to the eastern Caucasus and Asia, including China. 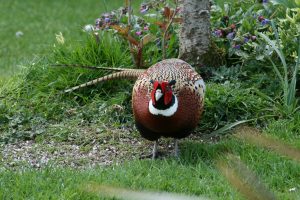 Hand reared Pheasants have a reputation of being a bit static in the countryside, and many birds end up as roadkill victims, (those that survive managed shoots). It is an irony that their carcases are picked over by Magpies and Hoodies, species regularly driven out of the hunting estates, but expert undertakers when it comes to scavenging roadkill.  Around these parts there are recent records of estate reared Pheasants wandering onto the Dublin-Wexford mainline train line near Avoca, with the subsequent inevitable collision which is fatal.  These birds are in turn picked up as carrion by Red Kites, one of which also made fatal contact with the iron horse! 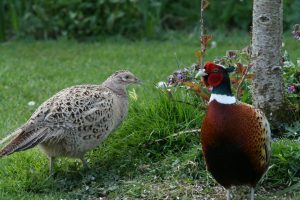 We have a pair regularly walking through the garden, from the surrounding cover, checking for fallen morsels under the seed feeders. The males never cease to fascinate in the depth and range of colour to their showy plumage.  The females are in the opposite, yet very attractive: they have a superbly toned plumage designed for concealment as a ground nesting species.