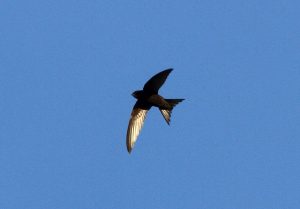 Celebrating Swifts seems the natural thing to do in this long hot summer.

A few years ago, sitting on a hot veranda in a small village of the Languedoc region of France, I was entertained by the sight and sounds of squadrons of Swifts, thunderbolts on breakneck missions around the narrow village streets.  The screaming parties of Swifts are indeed ‘the perfect incarnation of summer’s energy and passion’.  I wondered why such a bird, dependent on warm, dry weather would take the risk of flying further north, to endure the vagaries of an Irish summer.

They are right up there with the Swallow and the Cuckoo, icons of the short northern summer.  Unlike the latter two, at home in the wider countryside, the Swift is a true ‘towny’, at home on narrow streets and in church towers, under eaves and especially, in the blue yonder above our often-polluted settlements.  Swifts fly and forage so high for mini insect prey and floating spiders, they can escape the ravages of urban air pollution. 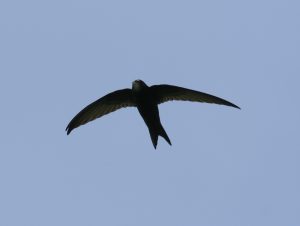 I once observed a pair of Swifts mate on the wing, from the departures lounge of Helsinki Airport: these remarkable creatures rarely touch the ground, unless that is, they fall from the nest as awkward youngsters.  The closest to perching is en route to their nest chamber under an eave or roof tile.  Young birds (4 years and under), don’t land at all for that period of their life. The birds can even sleep on the wing.

Because of their dependence on aerial insect prey, and how this might vary in supply from day to day, depending on weather conditions, Swifts can and often do stay away from the nest for extended periods as they hunt for prey in damaging wet conditions.  The young birds in the nest undergo a state of torpor, for up to 48 hours, to reduce their energy requirements and when the adults return, they are rewarded with a bolus of food that might extend to 1,000 minute insects! 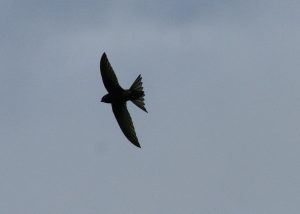 Their aerial exploits are the stuff of legends: flying behind depressions, moving into the warm air behind a depression, to scoop up the rich bounty of insects, these flights have been recorded, taking UK birds as far as Germany on feeding expeditions.  Similarly, a huge congregation of Swifts over the freshwater lagoons of south Wexford in mid-summer may have been Welsh birds chasing available prey. Not surprising therefore that these masters of the air regularly clock up 1000 km a day.  They return south to latitudes south of the Sahara in early August, catch them while you can.