Waxwing: nomad from the North 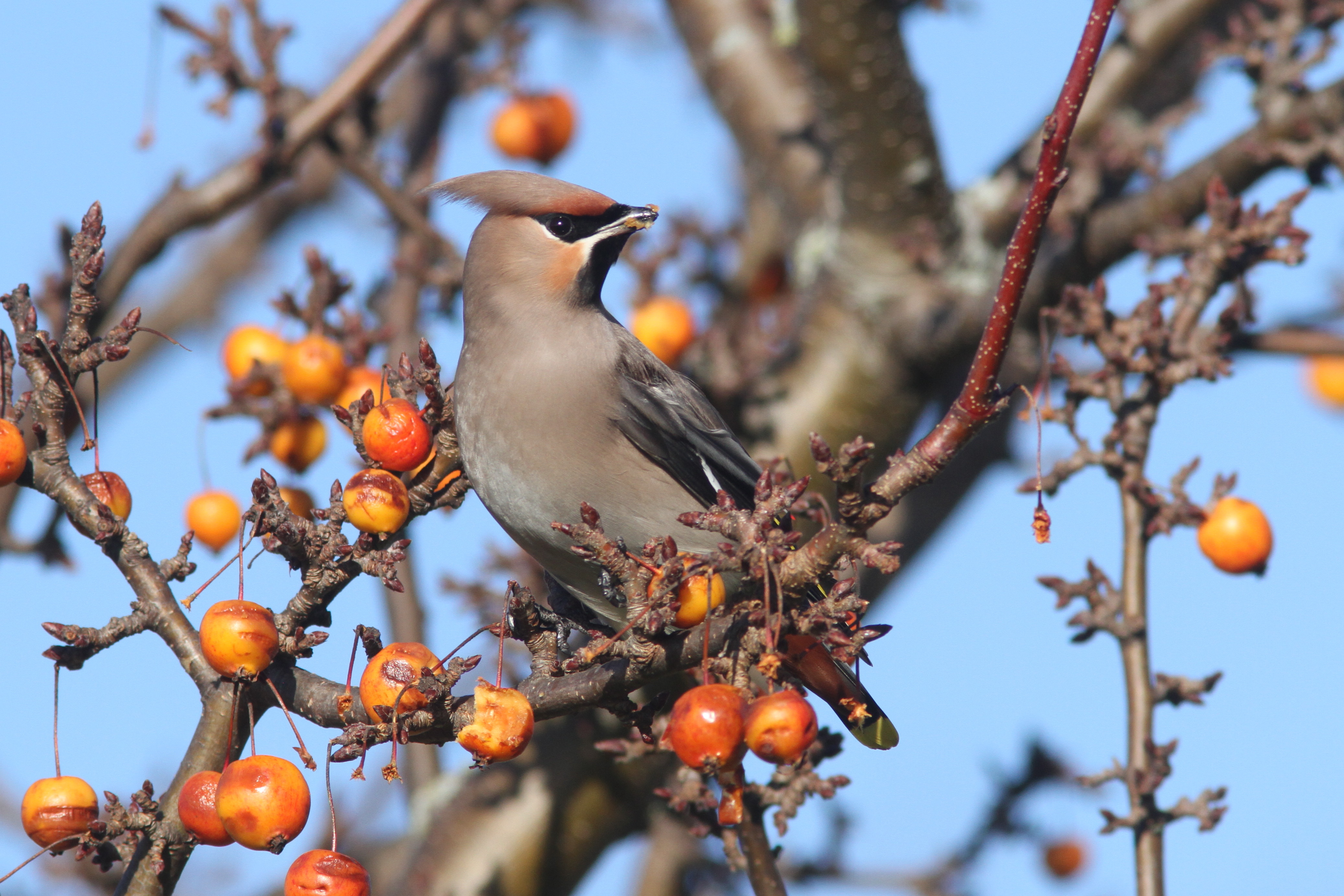 Waxwing: nomad from the North


Waxwings: nomads from the north.Though we continue to enjoy a relatively mild winter here in Ireland, central and northern Europe are contending with much harsher winter conditions. With a bare landscape and frozen conditions in the east, winter diets for hungry small birds mean fruit, and more fruit.. When the berry crop fails or is just exhausted, Waxwings become highly nomadic and desert their Scandinavian home patch to fly south and west in search of a food source. Thus, the east coast of Britain, and indeed the eastern side of Ireland can expect a few exotic looking visitors in mid-winter.  In so called Waxwing winters, many hundred birds arrive and their presence is usually noticed quickly due to the birds showy looks and their feeding behaviour. This winter has been relatively quiet so far, but a few birds have been seen recently in both Belfast and Dublin.

Waxwings are Starling sized, basically greyish with a cinnamon base, but with some very special accents: the head features a showy crest bounded by an up-curling black eye stripe, both features looking like they were refined in a wind tunnel.  The plump body has wings punctuated with white and yellow feather edges and a red ‘sealing wax’ band.  The rump and short tail are grey above, the latter tipped with a band of yellow. From below, the tail has a contrasting chestnut, black and yellow tricolour pattern.

Gardens and supermarket car parks are the favoured winter haunts as they often have a thread of berry bearing bushes and trees such as Hawthorn and Rowan, their favourite berry, as well as exotics such as Contoneaster and Pyracanthas.

Flying under the influence

Berry consumption is often prolific, with studies revealing consumption of up to 1000 berries in a day.. such supplies are expended quickly, hence the nomadic movements.  Speaking of movements, this is also the time of year when weather conditions assist the conversion of fruit sugars into alcohol via natural fermentation.

Waxwings can metabolize alcohol seven times faster than finches (which are seed eaters). In addition, a Waxwing’s liver constitutes nearly 5 percent of its total body weight, compared to just under 3 percent for finches. Larger livers and higher rates of alcohol metabolism evolved in response to occasional exposure to fermented fruit. For the most part, these adaptations enable Waxwings to dine on boozy berries without ill effect.  However, I have a recollection of Waxwings, exploiting a rowan crop in St Stephens Green, in central Dublin, a number of years ago.   The trees were planted in a tight network of office blocks and a few birds found negotiating the narrow paths through the glass panelled blocks too hazardous and steered into panes with fatal results.

Look for Waxwings anywhere there is a supply of berries still present, they are usually quite tame and when not feasting in flocks, they will sit up on wires to digest the fare, their outline quite Starling like.  If you are lucky enough to see one or a flock, please submit your sighting to www.irishbirding.com, who log all sightings of Waxwings and many other interesting birds on a daily basis.

Welcome to Irish Garden Birds. We have been watching and feeding birds in gardens for over 50 years! That’s a lot of bird food, but also a lot of pleasure for us, and hopefully our efforts make a difference to our local bird populations, and yours.