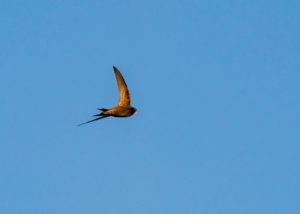 They are really remarkable little creatures. Small enough to fit through a hole the size of crème egg, swifts unravel their wings to become the fastest of God’s creatures as they zip through the air at speeds of 64 kilometres per hour. The name swift is well deserved.

They have a friend in Oran O’Sullivan, who is charged with encouraging these pocket rockets. The former Birdwatch Ireland general manager is on a campaign to encourage householders and community groups to provide nesting boxes for swifts.

Of course, they are not completely dependent on customised man-made accommodation as a visit to Wicklow Gaol confirms. The front of the prison-cum-museum building has been sealed, which makes it useless to birds seeking accommodation in cracks and crevasses.

But the old walls around the back of the gaol are riddled with flaws and fissures, offering homes, not only to the swifts but also to sparrows and starlings, the various species combining to bring life to the grey stone, transforming it into a mini-cliff face as it becomes a safe place to bring up young birds.

‘It’s a fine wall,’ remarks Oran. ‘I confirmed four swift nests in that wall last year and there could have been more.’ They move so quickly that it is often difficult to pinpoint precisely where they have gone. 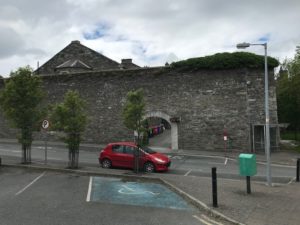 The sparrows and starlings appear almost clumsy beside their neighbours who are the ultimate flying machines, always more at home in the air than they are when obliged to come down to mother earth.

‘They are like something out of a wind tunnel,’ enthuses Oran, using an image drawn from the high-tech world of motor vehicle design.

With their scimitar-like wings, swifts are capable of covering 500 kilometres.

Once the young ones tumble from the nest, they may not touch terra firma again for two years, as they belong to a species which takes its insect diet in the air, often sleeps in the air and even mates in the air.

Compared to these incredibly nimble fliers, with their amazing stamina, even their more numerous swallow cousins are pedestrian slouches.

Swallows, by the way, are smaller and they have pale breasts where swifts are dark chested.

Swallows build elaborate nests from mud while swifts are more Spartan when it comes to setting up house than the Spartans ever were.

They may decorate their pads with a feather or a light piece of straw but they are limited in their choice of home furnishings to what they can pick out of thin air.

It is reliably reported that, if a swift finds itself on the ground, then it has no way of returning to flight, its feet so underdeveloped that it cannot perch on branches or overhead wires. 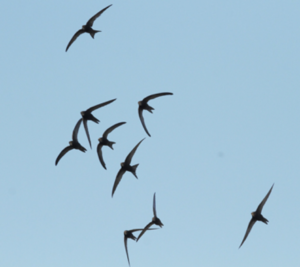 ‘I have been bird watching since I was seven years old,’ reveals 64 year old Oran, a Dublin native who has spent much of his life in County Wicklow.

Family visits in boyhood to the West entailed angling trips with his father but the fish proved elusive so the youngster found more entertainment in looking at the birdlife.

He became hooked on the ‘Amuigh Féin Spéir’ television series of nature documentaries and attended wildlife lectures in the Carroll’s Theatre.

However, he studied business in UCD and emerged from college ready take his place in the clothing sector (the rag trade as he calls it), eventually opening a shop in Wexford.

With the Slobs and Saltees on his doorstep there, the town was the obvious choice for someone with his passion for ornithology.

He looks back on his days as an executive and entrepreneur, and admits that business was always his way of raising funds to go bird watching.

Holidays were spent with binoculars in North Africa the Middle East or East Europe, tracking the lives of his feathered friends.

The hobby became his livelihood when Birdwatch were looking for someone to carry out a survey of choughs along the south coast of Ireland.

He volunteered to be one half of a two man team which walked the cliffs from Carnsore to Kerry, spotting and counting and logging.

Once all the choughs had been identified and assessed, he was recruited as an administrator.

Taken on originally for just a few months, he became associated with the organisation for a quarter of a century before moving on in 2017.

His blend of business experience and enthusiasm for the birds made him a round peg in a round hole, a good fit.

When he started, there were just four employees on the books, working from an office at Monkstown in Dun Laoghaire.

By the time he took his leave, the staff numbered 34 and the headquarters is now in Kilcoole.

Government and EU money were the principal drivers in the expansion, plus the funds generated by the sale of the building in Monkstown.

Under Oran O’Sullivan’s stewardship, Birdwatch took on 220 acres of coastal grassland which has been re-wilded to become the East Coast Nature Reserve at Newcastle

He followed suit, also moving to County Wicklow and is now a happy blow-in since the mid-nineties, currently resident in the countryside between Glenealy and Ashford.

When he stepped back from his job as general manager at Kilcoole, he set up Irish Garden Birds which sells nest boxes as well as food for bird tables.

The work left him with time to take up last summer’s offer of a job with the county council counting swifts at the invitation of heritage officer Deirdre Burns as part of a biodiversity programme.

The population is estimated to have dwindled perhaps 40 per cent in the past decade, though the problems may have little or nothing to do with Irish condition.

Many of the factors causing the decline are probably connected to circumstances in Africa where they spend eight months of each year, in Congo and other tropical locations.

They arrive promptly each year at the start of May in Ireland for the breeding season and then make the return trip each August.

Typically, small birds and mammals are short-lived but swifts are an exception, often surviving for twelve or more years.

His mission in 2019 was to come up with an estimate of how many birds were coming to Wicklow and find out exactly where they were nesting.

So it was that he and a colleague Ricky Whelan spent months on end staring at cracked walls on churches or libraries and peering at out-of-line roof tiles on private homes.

They identified 103 nests, with ordinary houses the most frequent location though many home owners had no idea that they had tenants. 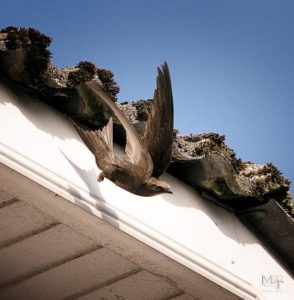 Swifts tend to be townies, with Arklow and Wicklow the towns they love best in this part of the world.

‘I went all over the county and it was great craic,’ Oran smiles, reporting ruefully that he drew a near blank on his own patch, in Ashford and Glenealy.

Rathdrum, with its collection of old commercial buildings, however, proved fertile swift country, along with Wolfe Tone Square and surrounding districts of Bray.

Meanwhile Enniskerry was surprisingly low down the league table.

The top six on the list of confirmed locations, in order of importance were: 1 Wicklow Town; 2 Arklow; 3 Rathdrum; 4 Bray; 5 Baltinglass; 6 Greystones.

Centres on the ‘not confirmed’ list were Kilcoole, Avoca, Coolboy, Enniskerry, Redcross, Ashford and Glenealy.

All told the Whelan/O’Sullivan sweep pinpointed 103 swift nests in 2019 and an estimated county population of 367 birds.

However, this year his main mission is to work with tidy towns and other local groups to ensure that there is somewhere for swifts to stay when they arrive from Africa.

He offers a choice between a synthetic nest box made in Killarney and a timber nest box crafted from cedar wood to a Dutch design.

Arklow tidy towns has ordered half a dozen and boxes have gone up in Dunlavin.

High above the heads of visitors to the county council HQ in Wicklow is a triple-nest box on the third floor complete with a caller sound system which uses swift recordings to attract the interest of likely residents.

Oran remains fascinated by apus apus, to given them their Latin name, and their ability to remain aloft for months, if not years, without a break.

In their pursuit of insects, they may wander 60 kilometres from home seeking food such as flies, mosquitoes, midges and aphids.

Zig-zagging through the air they often fly 800 kilometres in a day. Truly, they are remarkable creatures and well worth our looking after.