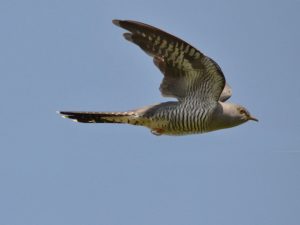 The most iconic sound of late spring is undoubtedly that of the calling Cuckoo, one of the most talked about in the countryside. Traditional letter writing to the national newspapers recording the event are perhaps on the wane, like the bird itself.  Of course, for small birds like for instance, the Meadow Pipit, this sound of spring spells doom.  Cuckoos have devised amazing ways of ensuring they can shirk all parental duties by laying single eggs in unwitting hosts nests and even head off south to Africa in high summer or early in the autumn, leaving the young, fattened by foster parents to find their own way to their winter home. 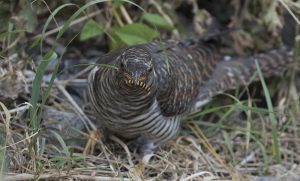 The website www.springalive.net  reports the movements of a select number of spring migrants right across Europe, including Ireland. The database for spring shows a total of 116  reports of Cuckoo up the western seaboard compared to just a handful up  the east coast.

The top figure is county Donegal with 28 reports of calling Cuckoos, followed by Clare with 27, Mayo with 24 and Galway with 17.  County Wicklow is best of the east and midlands with 7 records.  This out turn neatly reflects the distribution picture we have for Cuckoo from the Bird Atlas.  It also correlates with the distribution map for Meadow Pipit: commonest in the west and north west of Ireland and indeed in the same regions of Scotland. Open, marginal land, rich in insect life and scrub cover provides shelter and an extensive as distinct from an intensive farmed landscape, so important for flora and fauna to thrive in. 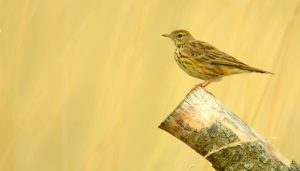 Spare a thought for the Meadow Pipits, some of their type have had a hard breeding season, rearing a nestling that ejects the rest of the clutch and then goes on to grow to twice or three times the size of its foster parent.

Special thanks to Roly Heaney, Liam Kane and Shay Connolly for permission to use their photographs.