Driving down our unlit muddy lane, on increasingly dark mornings an hour before sunrise, I have to be careful not to collide with least two Robins, foraging at this early hour. They are the first birds to stir on my patch, those big eyes capable of discerning prey well before the other garden visitors.

One might wonder when Robins sleep actually, for they are also known to sing in the dead of night, particularly if there is background or street lighting.  However this activity has a function to protect the all-important territory, which in winter may ensure or not, the very survival of the bird.  By starting the feeding routine early and finishing late, they maximise the calorie intake of short winter days.  Robin behaviour brings them into most home and garden realms, instantly recognisable and universally noted as a good companion in the garden.  They are typically at home in freshly turned soil, sensing the high chance of a tasty and nutritious morsel by simply following the gardener, the lawn mower or indeed the grave digger.  Perching on spade handles is well established, but Robin traditions are far greater than merely as gardeners assistants.

At Christmas time we are reminded of their long association with the celebration of the feast. Robins first appeared on Christmas cards in the UK as far back as the mid-nineteenth century, as the sending of cards became a commercial reality in the 1860s. The earliest illustrations depict the Robin holding an envelope in its bill, with the tag lines: “Go little gentleman, much sought after at Christmas time, The Postman”.  The Robins bright red breast mirrored the bright red livery of the Royal Mail staff tunics (and their vehicles and post boxes to this date). 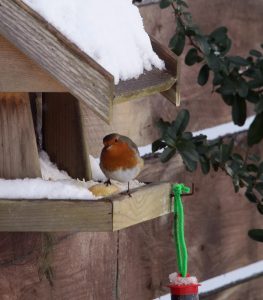 Fluffed up in the cold: Robins look even more engaging. (c. Oran O’Sullivan)

Yet in other parts of mainland Europe and east to Russia, Robins of a different race are shyer and more likely to remain in woodlands, out of sight.  Indeed, they move away from colder climates in winter.  In these countries, the Bullfinch often replaces the Robin as a Christmas icon.  The male Bullfinch remains on in colder climes and exhibits an even more vibrant and complete red tunic.  The Christmas tradition of decorating the darkest days by adding lights, splashes of bright red berries and red breasted little birds continues to brighten a largely dead or dormant landscape, long may it continue.